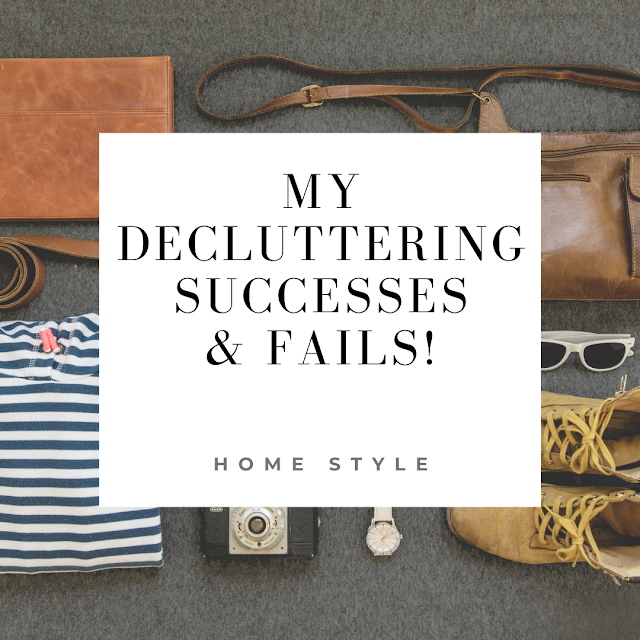 During lock down I set myself the mammoth task of Decluttering our house and I have to say I absolutely loved it. I had time to spare, a house that was feeling more cluttered by the minute and hours to binge YouTube videos from the expert declutterers for a little inspiration.

I got stuck straight in with our clothes and subsequently got rid of probably ten bin bags worth to the charity shop! I then moved round the house, sorting and organising our pantry, drawers, cupboards, you name it, I stripped it bare, got rid of lots and reorganised in a more user friendly way.

Fast forward to now though (possibly 6 weeks later) and the house is once again a total disaster and I really need to do the whole process all over again, so I thought I'd share my fails, where I went wrong and also what I'll do to get back on track.

First though, I do want to share a few positives that have come from this feeble decluttering attempt, because although you wouldn't think it to look at our house right now, it has helped, a bit. The house is really old and needs a lot of work still, which doesn't help with having less clutter as it means we have things in places just to hide cracks, damp patches and bad paint jobs! One big thing that has stumped us is problems with our electrics meaning we have few plug sockets and far too many things like battery operated lights and gadgets to hide the lack of decent power. When we were down south we had no problems finding reliable electrical services in London, but in the Midlands, it's like nobody wants the work. So for now some of these items will remain until we can have the work done properly and finally free up that space.

So now I've been through everything in the house I know exactly what we have, so I'm less likely to buy things again that I don't really need. I'm also shopping less generally as quite frankly the whole process is a lot of work and I do not ever want to tackle all that again. Lastly, I've been a lot more picky with clothes shopping, especially on charity shops. The amount of clothes I got rid of was pretty disgusting, especially considering that  I usually live in the same clothes until they break, so it was all just needless spending and a total waste. I buy a lot from charity shops because I tell myself I'm doing a good thing supporting a charity, but actually I think that has just become an excuse to hoard clothing and actually when I came to do that big clear out, most of it was charity shop items. The best thing is that we know where things are now, if we need a light bulb, I know it's in the DIY basket, garden tools have their own space and I have my own storage for arty bits. It's been a much nicer way to live, but definitely needs some more sorting!

Onto the reasons now that the decluttering this time was a bit of a fail and firstly and most importantly I guess, is that I just didn't get rid of enough and it's as simple as that. Our home looked OK, there was more space but every drawer, shelf, gap behind doors, hanging hook and nook were still full to the brim even though they looked neater and we had more space. I need everything to have a place, but an easy chuck it in place, not where I have to play Tetris every time I put things away.

We got rid of a crazy amount of stuff and I'm very glad we did, but I think a second load is definitely needed. Having spent so much time at home, you do appreciate any spare space and it does feel less stressful when there is less stuff weighing the house down. So I'd say the biggest fail was just not doing enough, which was hard to see at the time with bin bags piling high, but this time I want actual clear spaces, I want room for new things without them being in the way. I still want a wardrobe with only clothes I reach for, so we're not there just yet.

Secondly, I felt alone in the whole thing. I beavered away happily sorting the house, the kids left me to it, Adam shipped the things to the charity shop and I got stuck into sorting our home, which is all good. The only thing though is that I felt that because nobody else really got involved, they weren't on board to help keep things in order either, so next time I want to involve everyone so they know where things go and the house isn't just 'my' responsibility.

Next I guess would be that I wasn't brutal enough in my chucking things out stage. I really thought I'd done well, but I can see lots of things already that I know I won't wear or use and we're still finding kids clothes that don't fit, so there's more to go and I need to be a lot harder on myself. Pretty much everything can be replaced if I regret getting rid one day, but I know I never will!

Lastly, I think I went into it a bit blindly and didn't have much of a structured plan until nearer the end. When I go again, I want a clear plan from the off. I'm an avid ticker offer, so I can create some to do lists to get through and to make sure all areas are covered as I know I missed some last time. I do think as well that we just get used to the clearer home really quickly, so I'll probably feel like this again after round two, but it's taken a long time to get this cluttered, so it's going to take a while to put right too.

So onto round two, wish me luck! If you have any tips let me know.