Create || Getting To Grips With Art On The iPad Pro 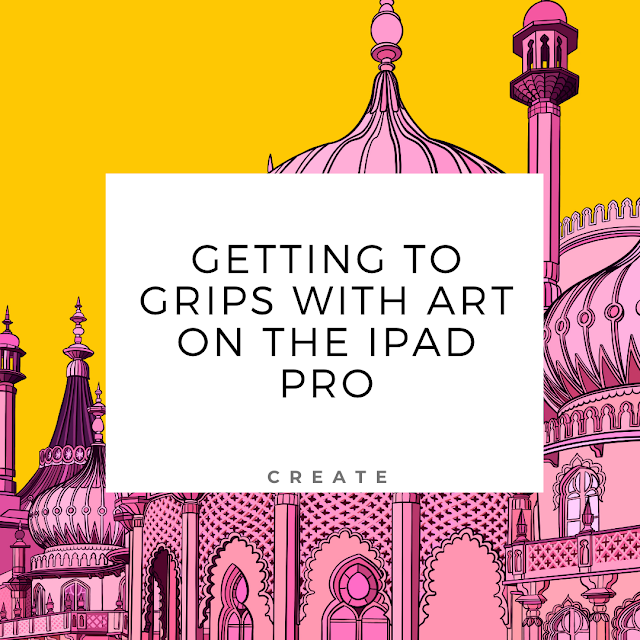 Last December I was gifted an iPad Pro, something I've been utterly lusting over for some time! When I say gifted, it's not a blog review (pop down those pitchforks) but a Christmas gift from my husband, as it was his brothers old one and he was upgrading. So new to me, but not new, and really really cool! Brand new, a good size iPad Pro or in fact any size one will set you back at lest a grand, with an Apple pen, case and all that good stuff. Second hand though, you can pick up a pretty good one for around 3-500 pounds, and they are so so worth it, especially if you’re creative and want to do a little more design/art work digitally without the mess of painting or using other physical mediums.

My iPad is the Pro version, 12.9 inches and it's a great size to be working on as you can zoom to see what it will look like printed and get a much better idea of scale compared to a smaller device.

Starting with the pros as this will be the much bigger list!

Paid for itself within a month - things that took me hours and hours using a laptop and mouse were painstakingly long, but so so much quicker on the iPad. The apple pen makes everything SO much easier, and as it's pressure sensitive it's much easier to get more natural 'hand drawn' looks in a good way, something I struggled with using a mouse.

Procreate app - this has been by far my favourite app and thing about the iPad. There are some things I am still learning about it but it's an amazing tool for artists and has so many brushes and art styles possible that I've managed to create all kinds of things from text art prints, painted portraits and best of all mastering pattern designs which has been a huge chunk of my income this year.

Screen and sound are incredible - having only had android/Amazon devices before, the quality of this is just insane in comparison. The colours are crisp, bright and very true to life and the sound is loud clear and crisp too without that annoying echo/tin can kind of sound.

Garage band is fun - I'd dabbled in this while volunteering in a local school as it's what they used for music lessons, a stark contrast to the out of tune recorders and barking keyboards we had at school! Garage band is a music making app that allows you to record all kids of sounds, use musical instruments and if you're not feeling too creative, then there's loops to use and smart buttons that create a random sound beat or melody for you. This is great to play with, to record songs with and if you're a creator or youtuber then it's great for making intros or music to use without having to worry about copyright or being muted by the lovely social media gods.

Easy to use - The iPad was easy to use straight away, I set it up in minutes, paired the pen in seconds and I was good to go almost immediately! I paid for a couple of apps like procreate and downloaded the tablet version of Photoshop as I already had an account for that.

Great quality - everything apple just feels great quality, it's a joy to work with and the apple pen is just genius. Both my kids beg to have a go as they love drawing on it too, so it's been a great creative addition to our house and a true game changer for me work wise.

Photoshop on iPad is rubbish compared to the desktop version, so much so that I've converted almost completely to procreate after using Photoshop for twenty plus years! I still need Photoshop sometimes for old files etc and I just use the laptop because it's easier, so it's probably going to be deleted soon from my iPad is it takes up space and just doesn't get used.

I haven't quite spent enough time to figure out 'the cloud' but it pops up to remind me I've filled it constantly which is both my fault and also annoying.

The pen is always connected but it quite often says device not recognised even though I'm using it. After googling for answers I think it's just one of those little niggly things that happens every now and then and isn't really much of a problem but worth mentioning.

Mega expensive for most normal people, not just the iPad itself but the pen is over £100 a d accessories like a keyboard/cover, you're looking at close to £200. There are supposedly compatible cheap alternatives out there, but if you've spent lots on your iPad it's just not worth the risk in my opinion. That said, the price becomes far more reasonable when you actually get to work and realise that everything is so much quicker, meaning you're able to work faster and for artists like me, create more work, produce more commissions and get more sales. Now I've had one I can absolutely appreciate the price and wish I'd got one sooner! If I ever had to, I'd have no problem paying full price for an iPad pro because they have for me made a huge difference to my business and I've gone from earning a part time wage from home to a decent full time one in the past twelve months and this is largely due to having an iPad.

Over all, I'd highly recommend the iPad pro to any artist, but one compatible with an apple pen is an absolute must! Everything is way quicker than anything I've done on a desktop before and it's so much easier to use than a traditional graphics tab and computer. Seeing the marks on the screen react like a real pen/paint brush, adjusting to pressure added and producing real art work without the mess or expense has been amazing, though I do have the odd day where I want to work with real pen and paper or get messy with real paint, but I've been far more creative with this as I can paint draw and design without having to move or pack lots of equipment away.

For me, this has been the best addition for my small business and if it's something you've been thinking about I'd recommend getting one as soon as you can, I'd have even put one on a finance plan if I'd known what I do now! I'm very grateful we were able to get one at a reasonable price though, because, Apple! I'm very excited for the new year now I know what I'm doing and have a much better grip on my business and a much quicker turn around on my work. If you're an illustrator or artist wanting a decent digital option, this is the best out there, no doubt.