Should School Kids Be Awarded For Their Attendance? 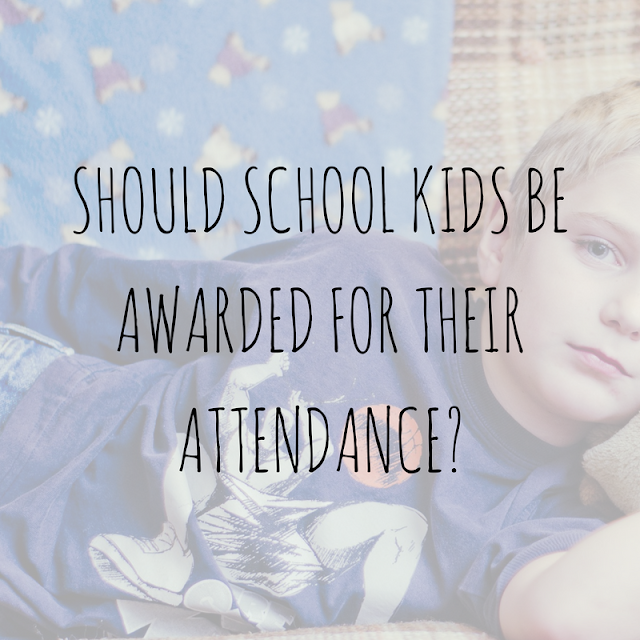 Just recently, Alf was awarded a head teachers award - and yes, I'm totally bragging about this, as I think all us parents should.

I was invited to his assembly to watch him get his certificate and for his teachers to say a little about why they had put him forward. It was lovely, I was so so proud of him. Seeing my little squish up there in front of the school, looking all nervous and shy and adorable. I loved it!


Shortly after handing out those awards they went on to some more for an art comp - fab. Next though wasn't so great, it was the awards for attendance. The class scoring highest would be awarded a special movie afternoon (I think that's what it was) for their 'efforts' in having the best attendance record for the term in the school.

Now, as much as I love rewarding kids for good behaviour, kindness, working hard, being polite, clever, helpful, something just doesn't sit right with me for them to reward kids for their good attendance. They are basically being rewarded for not getting sick and as much as the winning class were ecstatic, adorably jumping for joy quite literally, what about all those poor kids that got sick and had no chance of winning? What about the ones that maybe got so poorly they may have been solely responsible for their class not winning this treat? How can that possibly be a good thing or fair in any way shape or form?

If we take sick bugs for example, there's the responsible parent like most that would adhere to the 48 hour off school from the last bout of sickness. Then there's the ones that don't, meaning their kid then gets a better attendance mark, despite making others sick by coming back too soon. There's the kids that maybe don't have the healthiest diet because their parents can't afford it, or that live in a cold, damp house because it's the best they can get as a roof over their head. They get sick, they're off school and then what? They miss out on a treat because of something so far out of their control it's ridiculous.

I literally can't see any positives to this whole thing, it could cause kids to get annoyed at others in their class for bringing their class down or blowing their chances of a treat. It can make kids feel bad for getting sick too which is awful. It basically filters out the weak. I can kind of get behind awarding the top three kids or something across the school, it's less of a 'group effort' and means nobody is to 'blame', but still think it's a total farce.

Awarding and rewarding achievement should be based on individual targets. To reward just one class for something they have achieved as a group, make it something they can actually control, make it the ones that helped in the community, or stood out within the school for some reason - other than simply being healthier than others.

This all seems like yet another box ticking exercise that does nothing but reward the healthy and penalise the sick.

Oh, and yes even if it had been Alf's class that won, I would still feel the same.

I'm going to think of this every time Alf is home sick now, knowing that at some point down the line he will sit in an assembly and maybe feel that disappointment because he and his class mates have been unwell, had a few days off and missed out on achieving the pretty much un-achievable. This makes me sad.

Do you think kids should be awarded/rewarded for good attendance in this way?
Newer Post Older Post Home