Healthy Mama || The One About Smear Tests 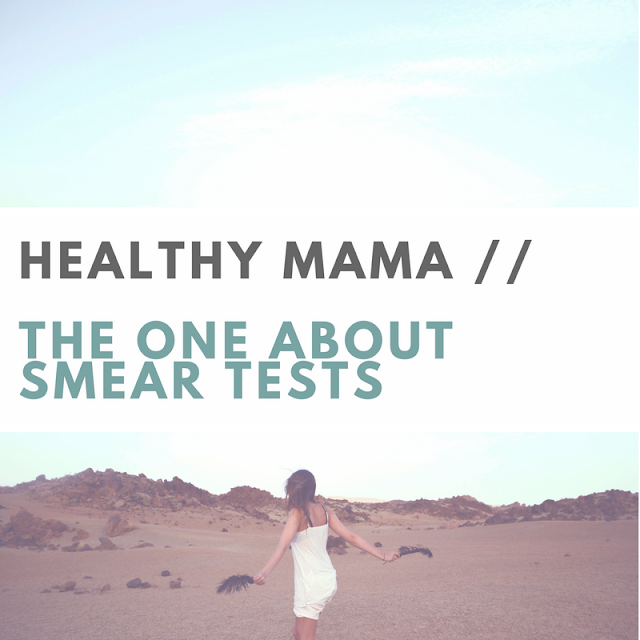 There's been lots of posts recently across social media about smear tests and this is truly a great thing. I've been shocked, saddened and actually a bit bloody angry to hear some of my friends say they've never had one, some that have simply ignored the reminders and some that just cringe at the whole thing and daren't make the appointment.

If you're one of those people that simply doesn't fancy it, then let me tell you. Having seen a 25 year old and 30 year old friend die of cancer, it does happen. It happens fast. It happens to anyone of any age and for the one thing we are actually offered free regular testing for (even if it should be offered sooner but that's another post all together) we would be fools not to just make the frigging appointment, suffer that few seconds of awkwardness and potentially save our lives.

That is all it is ladies, it's not painful, it's not life changing, it's not sexual, it's not violation, it's a few seconds of possible awkwardness with a nurse, in private, under a sheet. Awkwardness is nothing compared to all the things that could potentially happen if you don't go. Please, please just put up with that awkwardness and go. Tell your friends to go, make your Mum go, tell your sister she's a complete tool for not going, say whatever you need to, just get it done. Besides, it's not like we don't all face awkward every day at some point, bumping into an ex, letting a fart slip out, slipping in the street and styling it out, what's another dose of awkward for the average woman?

If you don't know what happens at a smear test, let me explain. You strip off your bottom half, you lay on a bed, you pop your feet together and drop your knees to the sides. The nurse will insert a speculum and crank it open slightly - slightly being the important word - they are not going caving. They take a little swab inside, take the bits out and it's done. As quick as you read that, it's all over. Now is that worth risking your life for?

For the ladies that simply 'don't want to know', that think they'd genuinely rather die or go through months/years of treatments instead of this simple little test, please think about it. Would you want to lose a friend, a sister, an aunt? Would you happily leave your children without a mother, your nieces and nephews without their cool aunt, your mother without her daughter? Whatever your situation, however harsh and OTT this may seem, it really is so so important and I literally have zero clue why anyone would choose to ignore it.

Please make an appointment, go do it now!

For anyone that needs a little more persuading, here's a kind of poemy rappy story thing I wrote to give you an idea of what could go on. It may be a little extreme and sad, but whatever needs to be said to make just one person think twice and get themselves booked in, I'll say it. Please share with anyone you feel needs that little elbow of persuasion!

She ignored the reminders
Smear tests just aren't cool
Letting some weird nurse
Inside you with a tool
But she left it too long
She left it too late
Then one day she was bleeding
Her bed was in a state
She went to the nurse
The very same one
That would have done her test
That would be over in one
The nurse said I don't like this
Go see the GP
There's something not right
We need to let him see
The doc he referred her
Straight up to the specialists
"Why'd I not take that test" she
Said, feeling like a mentalist
So now she's getting probed and the results they aren't good
"I'm too young to get cancer" she said, they said she could.
A few days later her phone began to ring
The hospital they urgently wanted her back in
They said they needed to operate to take away the cells
But once inside they saw things that rang alarm bells
This girl she was young, just 28 today
They said she wouldn't make it another year this way
They tried to do their best they took what they could see
But they noticed the big C had spread internally
It was too late and in two months this girl, she passed away
Her family
Her kids
Her friends heartbroken each day.
Things could have should have changed
Things could all be OK
If she'd just had that test
That one little test
That one with the speculum
That isn't the best
It's over in seconds though
It's usually fine
Get yourself booked
Take this as a sign.

What's worse a few seconds of laying on a bed
Or ignoring those letters and ending up dead?