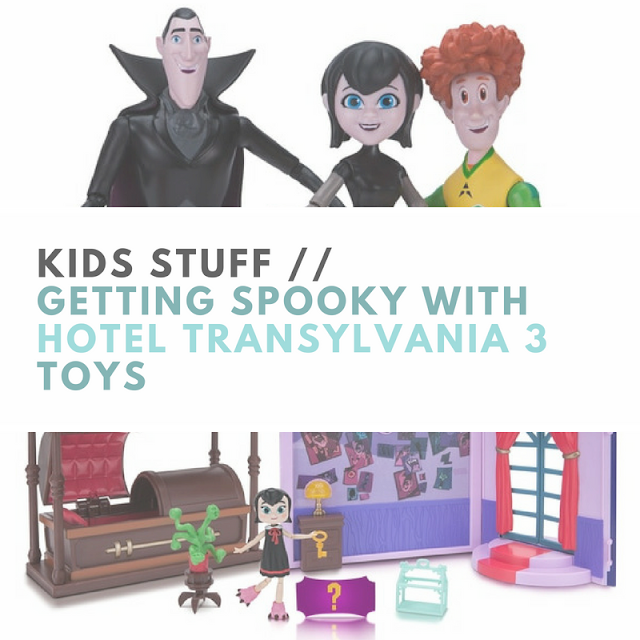 I'm a big kid at heart so I love watching films with my babies. We watch a lot of old and new classics and one of their absolute favourites recently has been Hotel Transylvania. We've watched one and two a million times each, sometimes more than once a day! With the arrival of part three and seeing the trailers in our local cinema recently, we are SO excited to see it before the holidays end.

Last week to get them even more bouncy about the third film, we were kindly sent some of the new toys to review that have been released alongside the new movie and clearly they were ecstatic when we finally opened the box! 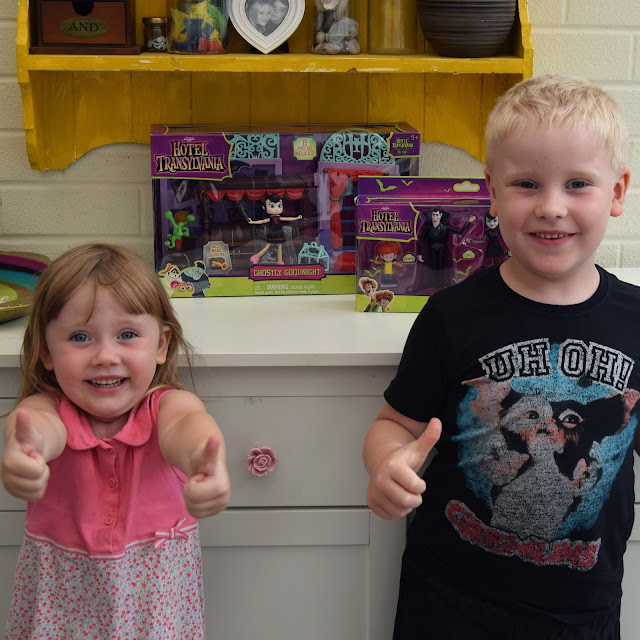 If you're not familiar with the films then firstly, you need to buy them (super cheap now on Amazon!) and watch them to death, they are brilliant films, not scary at all but fun, send a lovely message about love and acceptance whilst being really funny and entertaining. The main characters are vampires with a whole cast of monsters making it full of jokes but with the happiest of endings. I can't wait to see how the story unfolds after seeing the trailers. Bleh bleh blehhhh (if you've not seen the films then that will make so sense, so here's a preview).

The toys we were sent were some of the new Mystery Chests with collectible figures in, a brilliant Drac's pack and best of all, the Ghostly Goodnight Play set. 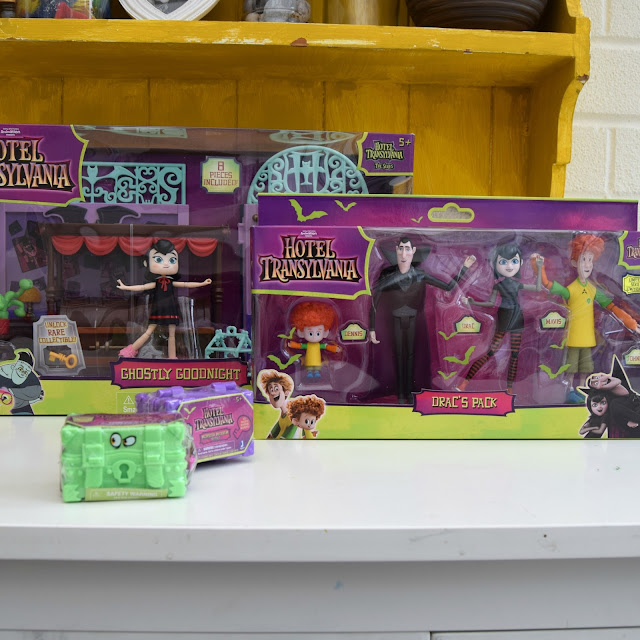 The Mystery Chests are the 'pocket money' toys of the collection and I have to say they are very cool. Each chest comes with its own little key that you just push into the lock to open the lid. Afterwards, the key can be clipped onto the box for safe storage. 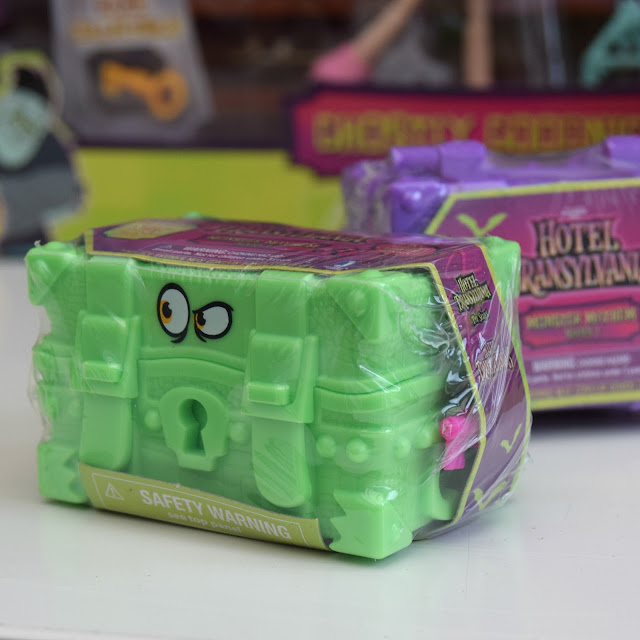 Inside, you'll find a mini figure from the movie. As both of mine are avid collectors of anything small cute and plastic, these were a welcome surprise and will now feature on their 'special shelves' in their bedrooms when not being played with. For just a few pounds, these are nice little treats or extras for special occasions and I think all kids love that surprise element. 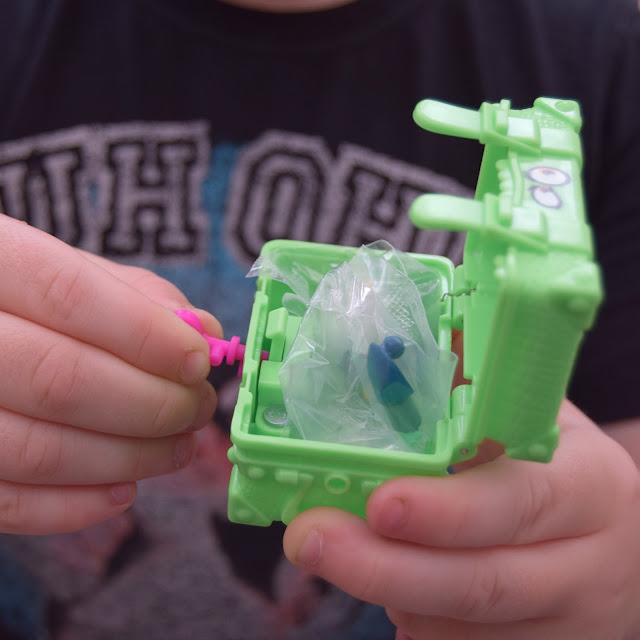 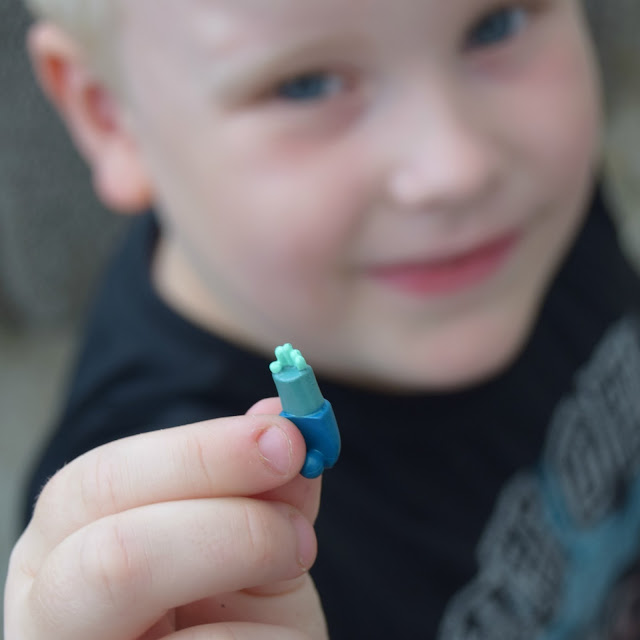 In the Drac's Pack, you get four poseable characters from the films, looking exactly as they do on screen. The kids loved that they could move the arms etc too, cue lots of weird muscle contest play posing that is absolutely not in the film but funny none the less. 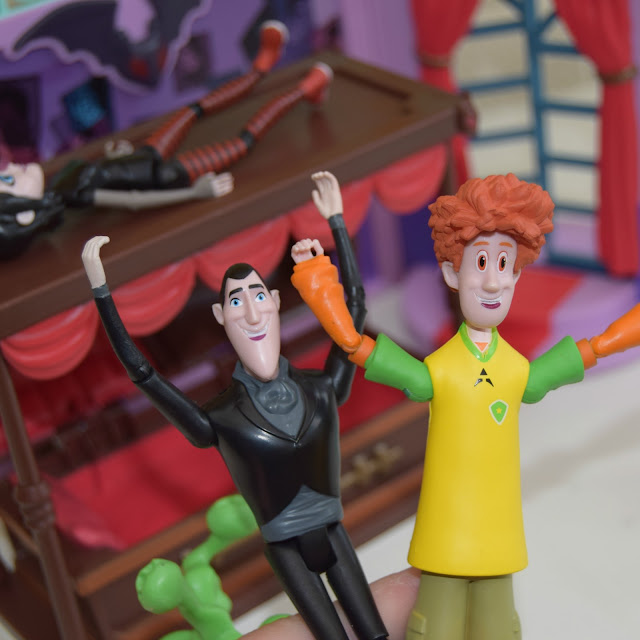 Some of the clothing bits can be removed if needed such as Drac's cape and they are packed with detail to make them as realistic to the characters as possible. This is a great starting point for any other spooky kids that want to play Hotel Transylvania at home too. 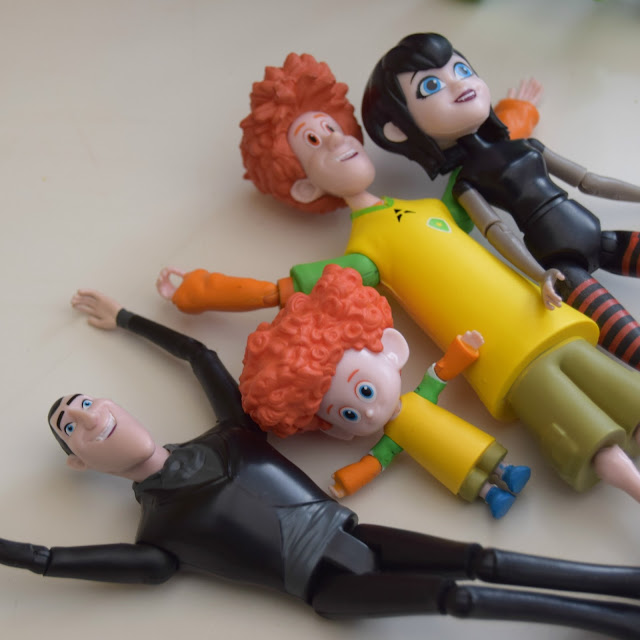 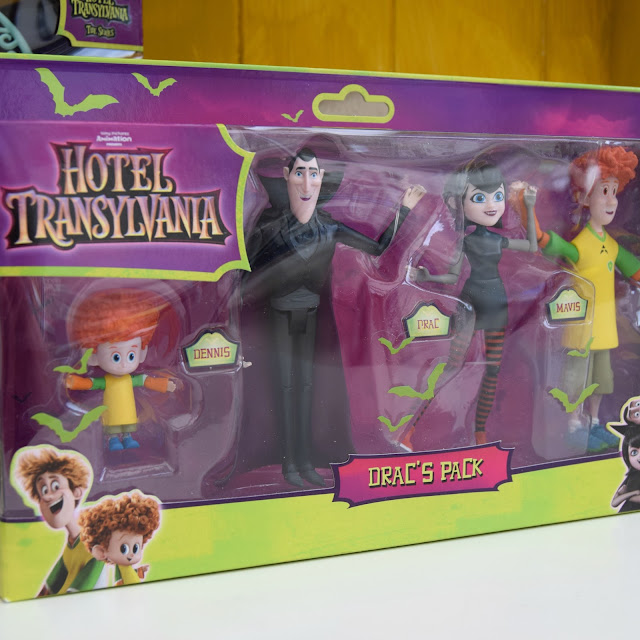 Lastly is the Ghostly Goodnight play set that comes with a little set of Mavis' room, complete with coffin style bed, Mavis figure and a few other small accessories. Both kids love a bit of weird and when that's combined with cute 'putting things to bed' play, this makes the Ghostly goodnight the perfect accessory for my little weirdos to get creative making stories and reenacting the films putting Mavis to bed. 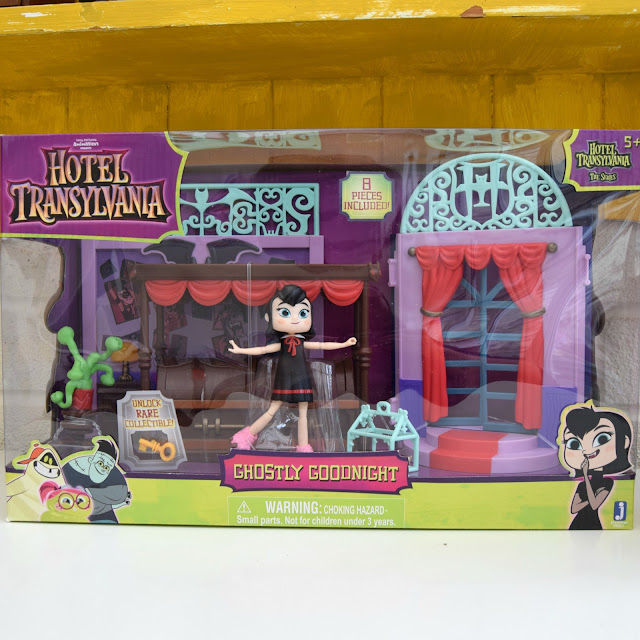 This is a great little set with lots of little touches to make it just like the film, with pictures on the wall, lots of detail on her 'bed' with a little key again to open, real opening windows for going for some bat time flying and even a little Venus fly trap plant. 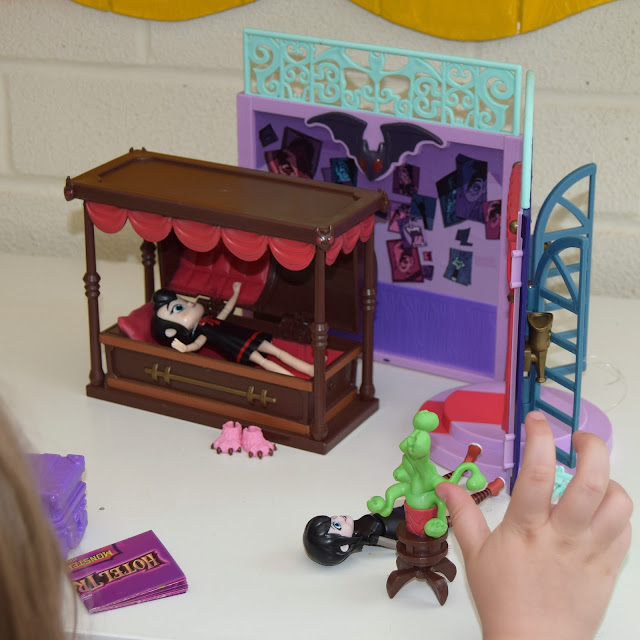 This set features another poseable but slightly more cartoon like version of Mavis (I really hope this means they are making a series too?!), but instantly recognisable and easy for the kids to get stuck into playing and making Mavis do her thang. Also, I love her little slippers! 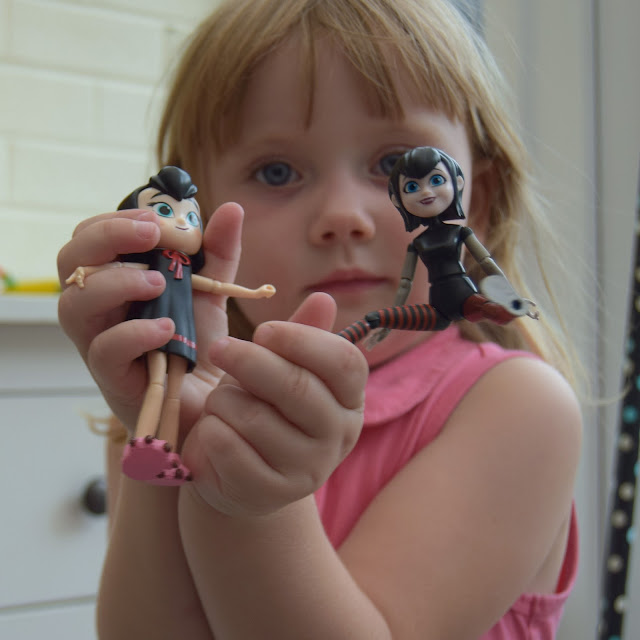 All in all, we are really happy with the toys we were sent. The quality is great, there's lots of unique features like the little keys and every character is so true to life of the actual film characters the kids were instantly able to recreate the stories from the films and make up their own gruesome tales. 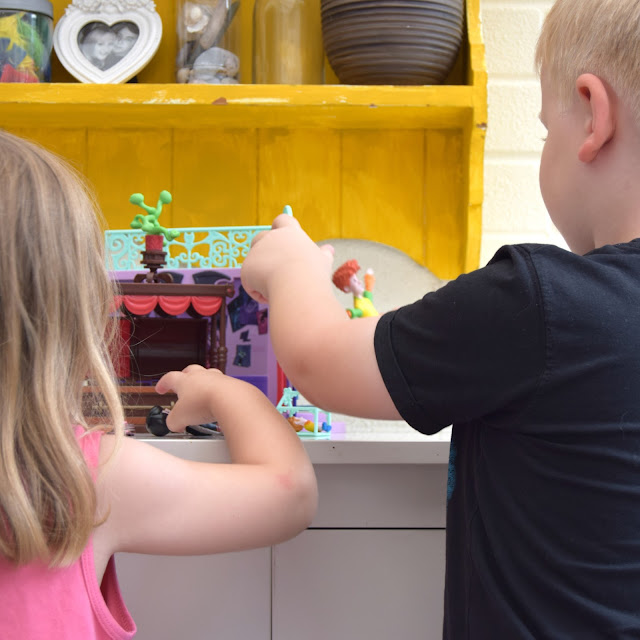 The toys are great value for money for any fans of the film and are just something slightly different to the norm when it comes to kids toys. A big thumbs up for these from us all.

Prices range for these products with the mystery crates priced at £3.99, Drac's pack (4 pack) priced at 12.99 and the Ghostly Goodnight at £19.99 which includes the Mavis figure. All these toys are available from good toy retailers like Argos, Smyths Toys and Amazon!

Are your kids fans of the Hotel Transylvania films too?

Check out these fab affiliate links at Amazon for more HT fun!