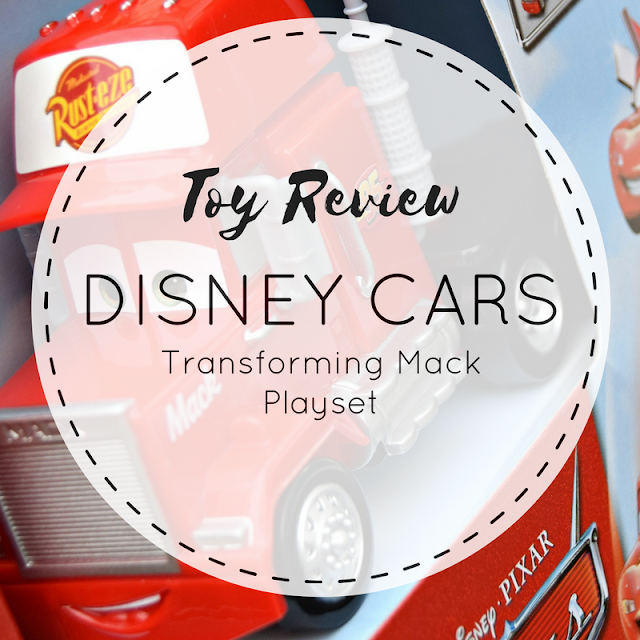 We are huge fans of all things Disney here and Cars is definitely up there with one of our favourites. Alfie loves the movie and it's one that regularly comes out on our cosy film days.


We've had a few little toys relating to the movies and Alf asked for some of the new play sets for Christmas, but as it was after we had done our shopping (from his first list!) he missed out which I've felt really bad about since! Just recently though, we were kindly asked to review the Disney Cars Mack truck which we received this week along with a couple of Disney Cars vehicles to use in play. 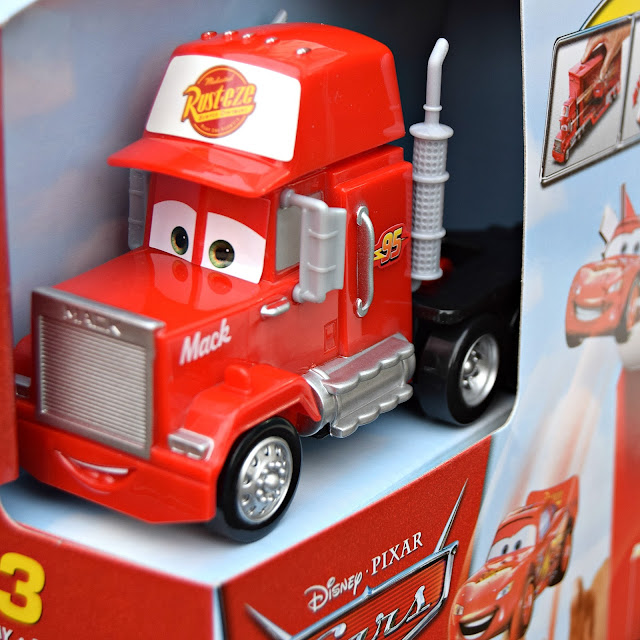 I was so excited to surprise Alf with this after school as I knew he really wanted it and it's just perfect for him. This set is good for me too, as it folds away and is small but packed with fun, just what we need in our limited space home. The set itself comes in the form of the Mack truck, which in itself is a pretty cool toy for whizzing around and reenacting scenes from the films. The truck is packed with detail and just like the real Mack we all know so well. The great thing about this truck though is what he is hiding inside. Mack opens up to reveal a jump that flies magically through doors and into a box provided. The red platform is to sit the car on which can then be flipped up to make the car shoot down the ramp and jump off the end into the box. The kids loved this stunt and it was great fun working out where best to pop the box for a safe landing! 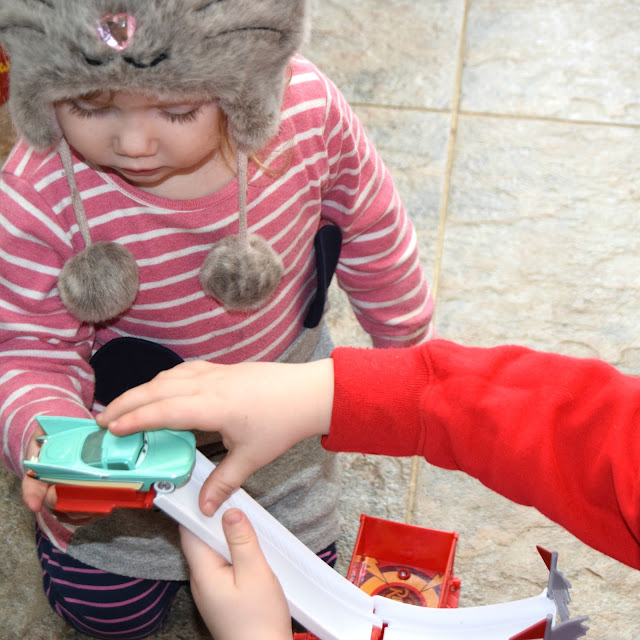 As well as the top ramp, there is another ramp beneath which clicks into place for a car to be launched into the air by pressing down on Macks cap. This bit was the best trick of the two but both are very cool. When playtime has finished, the set can be quickly and easily packed away back into truck form. We were able to fit a couple of cars inside too for safe storage. Alf found it all a bit fiddly to do by himself so needed a hand initially working out how to open it all out and pack away but after a few tries he seems to be getting the hang of it. The kids dived straight into this, it definitely has the wow factor and doesn't fail to deliver on fun. This is just £19.99 at the moment and I think it's a great gift for little ones, aimed at ages 4 plus, but I was more than happy for Sophie at 2.5 years to play with this too. The set comes with two flags/doors for the cars to jump through. Unfortunately our set came with two of the same halves to it doesn't match up as it should which although doesn't affect play at all, if we had purchased this ourselves I would probably have swapped it for a new set or sent off for a replacement flag. 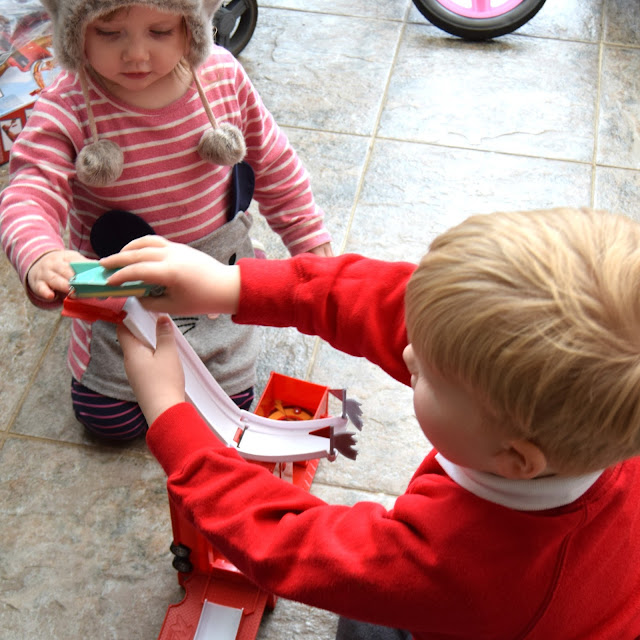 The only other downside for us was that the set itself doesn't actually come with any cars, these have to be purchased separately and I must admit I was surprised it didn't come with a Lightening McQueen vehicle and that was the first thing Alf queried too - 'where's Lightening?'. So, if you were going to buy this then definitely buy the corresponding vehicles to make it even better. 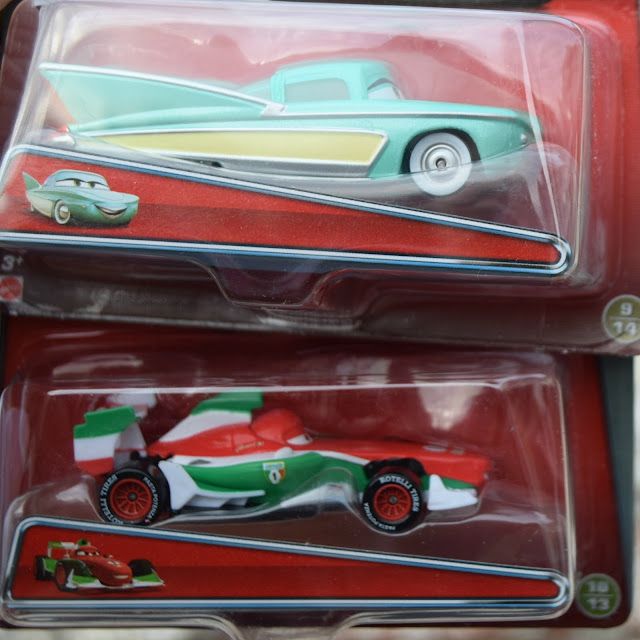 The kids have loved having Mack come to play and I really think it's a great toy that I would consider buying for other kids for birthdays as it's sure to be well received by all, it's fun, it packs away discretely and has lots to offer. 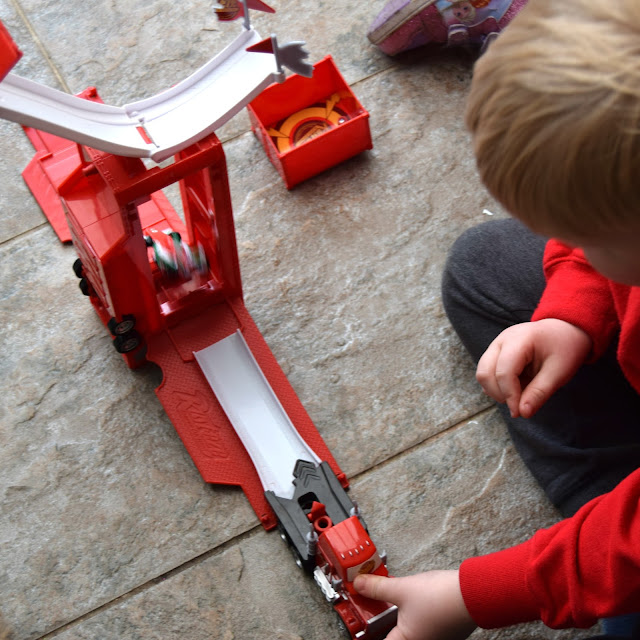 This toy gets a huge thumbs up from Alf & Soph and will no doubt be enjoyed for a long time. You can pick up these sets from Smyths toy stores and the cars from stores like Argos.


Do you have a little Cars fan that would love this set?