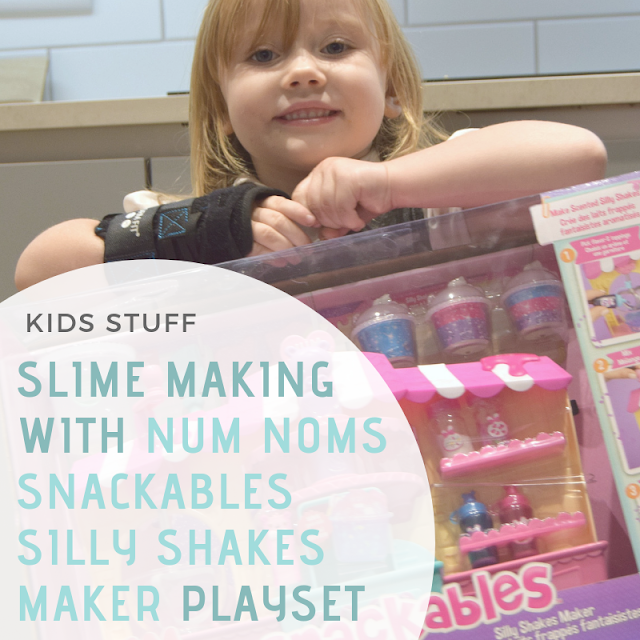 Like most kids now, my two are obsessed with slime! Buying slime, making slime and seeing how gross they can make their hands look with alien slime, 'unicorn poo' and all kinds of stretchy gloopy slime making appearances in our home. Although we've pretty unsuccessfully tried to create our own slime, just this week we were able to make perfect sparkly slime of our own, with the Num Noms Snackables Silly Shakes Maker Playset we were kindly sent to review. 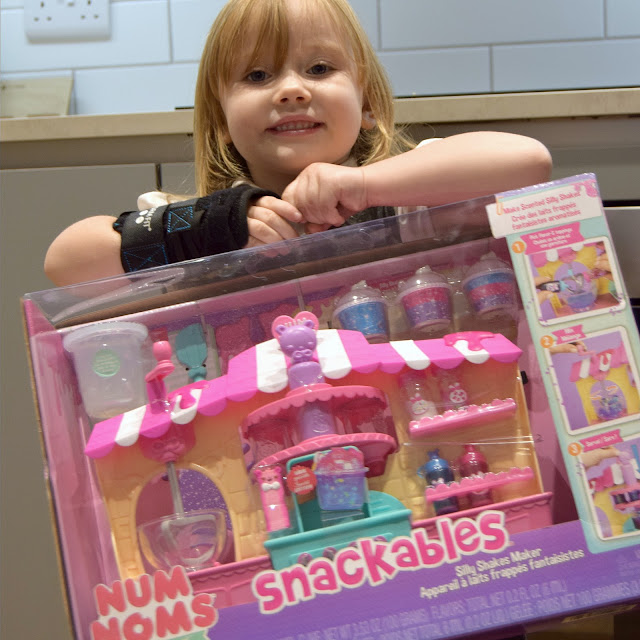 This set is very striking, in a large box with a shake style open front shop setting, with accessories to mix make and pot your own slime (shakes), with scented colouring and sparkles to decorate your creations. The kids were so excited when they saw this, it does have the wow factor along with the cuteness of all the miniature bottles, jars and shop fittings, just like a mini sweet shop I had as a child! 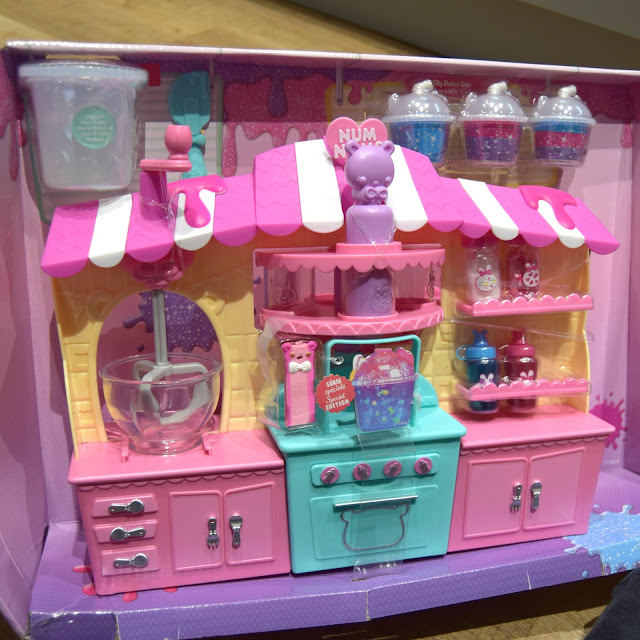 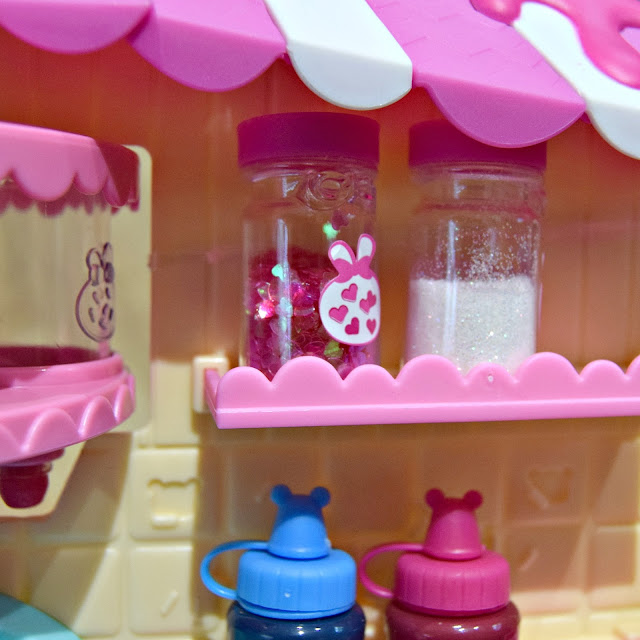 The instructions included in the kit are really clear and helpful which is always a good thing. It took a fair while to take everything out the packaging but when we did, it was easy to set up and get started straight out the box. Making the final product is a really simple process with just a few steps. So although there's mixing involved, it's only really to colour and add sparkle to the slime, meaning the kids can complete the pretty much all of the process by themselves (with a little supervision to prevent a house of slime!). 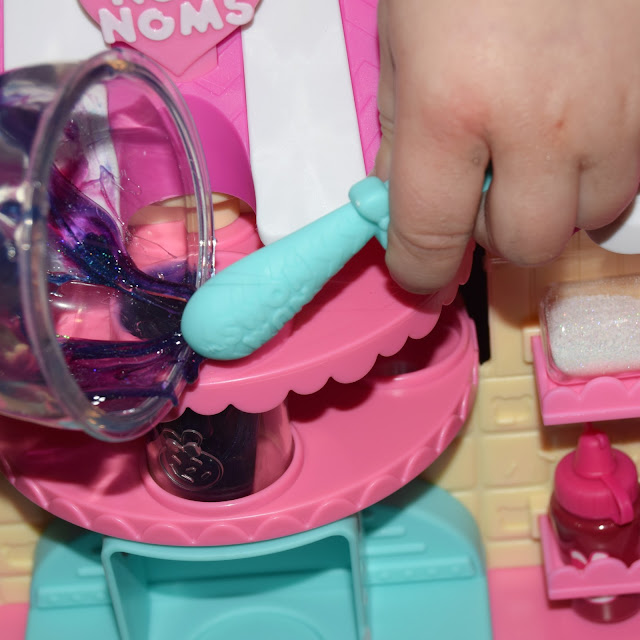 Creating the slime starts with adding some clear jelly straight into the mixing bowl using the spoon/scrape tool provided. The slime is much thicker than I thought and although it initially felt really sticky, if you go slowly it does come off hands and plastic very easily.

Once the clear slime is in the bowl, it's time to decorate with colouring and glitter. I was pleased to see the tops of the glitter lids have a restriction so that kids can actually sprinkle as opposed to the usual mass glitter dump we have with our arts and crafts! They are cute little pots with classic sparkles and hearts. The scented colouring comes in a condiment style bottle and both kids struggled to get the colouring out on their own so I had to assist with that part, but everything else they were fine with. 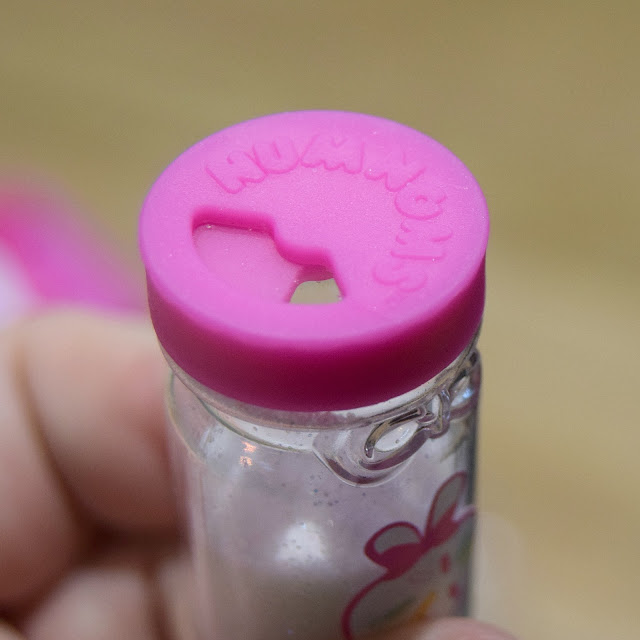 When it comes to colouring, less if definitely more! The colours are very vivid and we found this out the hard way with a very dark purple inky looking slime the first time and a light pink the second time with less than half the colouring. The lesser coloured version looked much more appealing!

The set has it's own mixer built in, which you can slide the bowl under and lift up to remove the bowl again and clean the whisk. I was surprised how well the mixture mixed as it's pretty thick but very quickly blended to make a sparkly fun looking slime. Although initially I thought this felt messy, it's really not and it's very easy to contain and clean up. 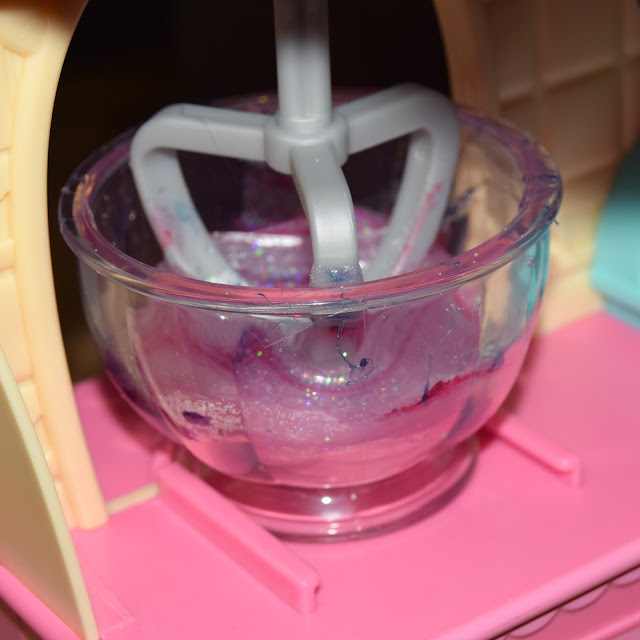 Once kids are happy with the mix, they can then scoop it out into the shake dispensers which turn round to make more than one at once. You can flip the pots round to the back when they need cleaning and they also have a stopper plug in the bottom to prevent the slime leaking out before potting up. 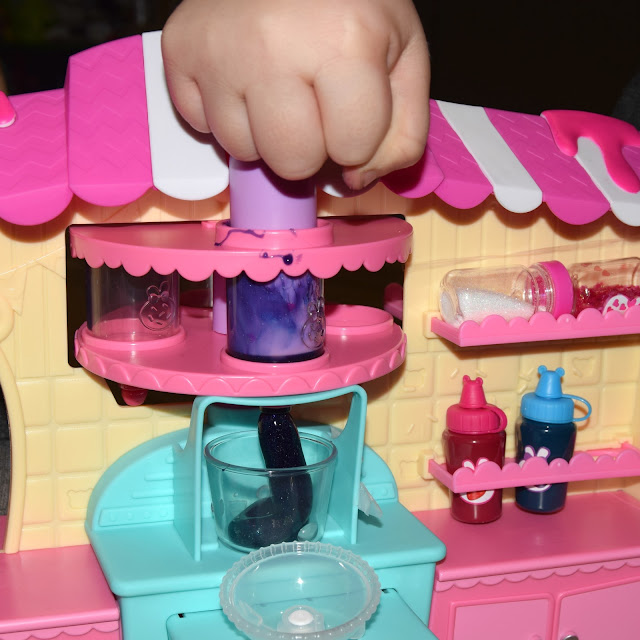 The 'milkshake' can then be squashed down using the purple tool, which oozes it out into the milkshake cups/pots. These can then have the lid added which have a little straw detail and make very cute little creations.

The kids absolutely loved doing this set. Creating their own slime that's actually usable and pretty has been enjoyable and I was pleased that even with both of them hastily creating slime, we didn't end up with a mess and it was super easy to remove from their hands, the kitchen floor, the kit itself and the cat that walked by at the wrong moment (sorry Ted). The only downside for us is that there isn't a lot of product that can be created and there was only a few shake cups to fill, meaning we could only make three types that had a proper pot to live in. Although you could empty and re-use, I can't see that you can buy a refill kit which means that to make more I guess you'd have to buy some clear slime or start from scratch? Otherwise, the use of all this plastic would be a bit of a shame, and although I know we would use it and find some suitable refills, I wonder if others would. 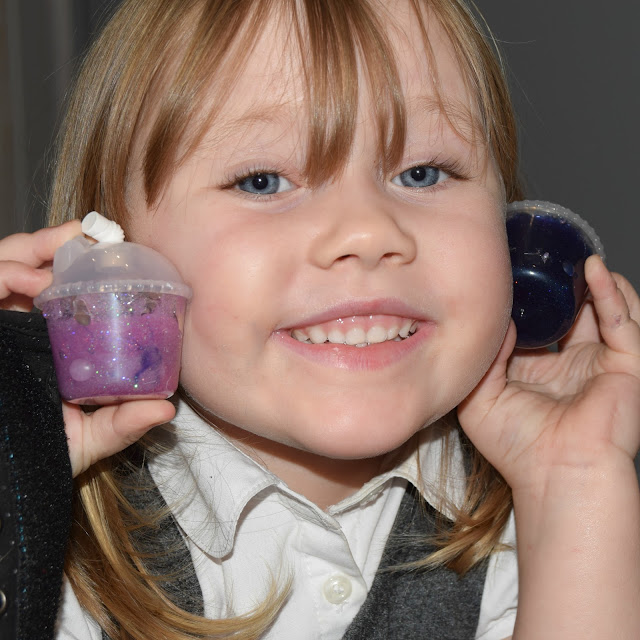 Overall this kit was a huge hit, the kids loved using it and are keen to make some more. I don't think the set is badly priced (currently £27.99 on Amazon) but I would love it if you could easily buy refills to keep using it and maybe they could make pots of slime for their friends for gifts too. I have no doubt that if this was unwrapped under the Christmas tree next month, then all slime loving kids would be well over the moon with it.

The Num Noms Snackables Silly Shakes Maker Playset is available right now from all good toy retailers such as Smyths, The Entertainer, Argos and Amazon (affiliate link below).

Do your kids love slime too?