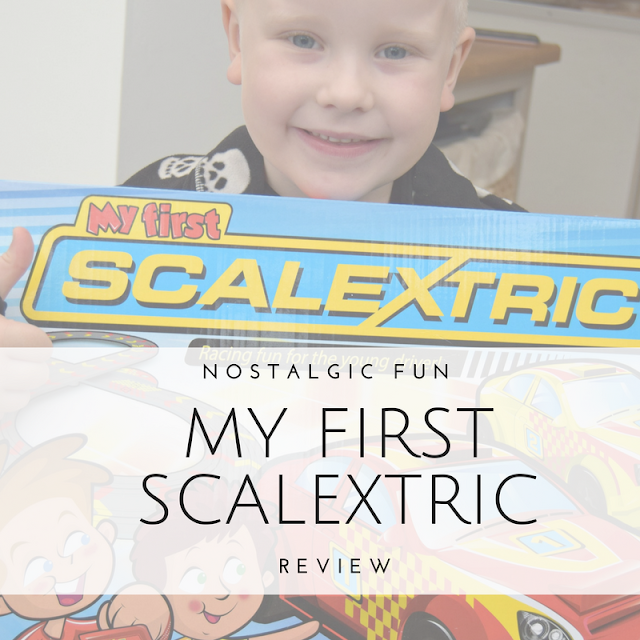 When I think back to the late 80's/early 90's when I was little, there's a few toys and games that are ingrained in my mind with some great memories playing happily with my brothers. One of those toys was our Scalextric set, I think it had mini Metro cars at the time.

It's no surprise that now we have our own kids, we were super excited to introduce them to the world of Scalextrics too, as well as getting to play with it again ourselves. Last Christmas, we got Alfie a very cheap little set on a whim, with some popular cartoon characters in the cars, which he has enjoyed. Just recently though, we were kindly sent the My First Scalextric to review, the official starter kit for newbies into the world of Scalextric for ages three and up. 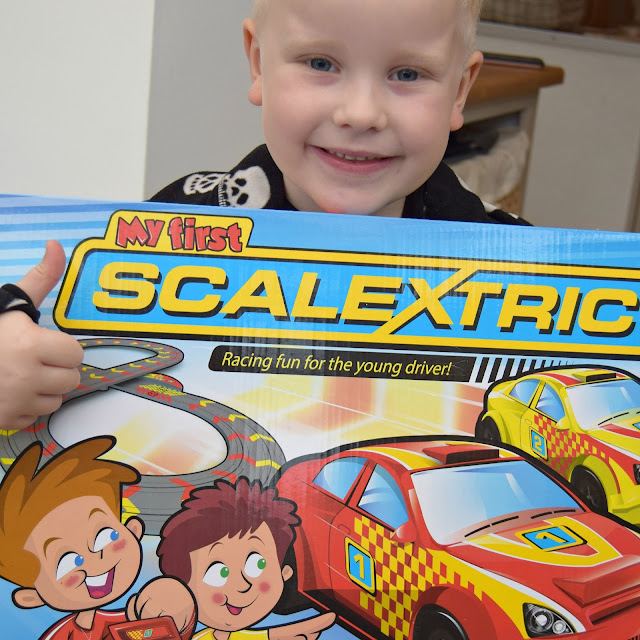 With a simple click together figure of eight track, two rally cars and colour coded controls, this set can be added to with other products from the Micro Scalextric range meaning you can extend your track, add new cars and create the ultimate racing circuit right in your living room. There are some great benefits to this kind of toy too such as; 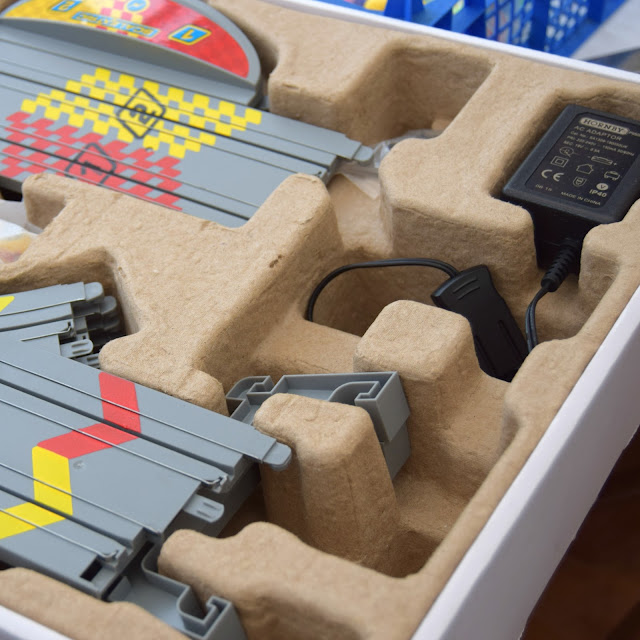 The main thing I was expecting with this set, was for it to be super robust and tough. Unfortunately though I did manage to snap one of the clips when popping the very first bit of track together. I'm not really sure how I managed it. After that first bit though, the track was very easy to put together and the little bit that came off made no difference to game play luckily. The cars are set up ready to pop on the track to race and the controls simply plug straight into the colour coded ports along with the power cable. 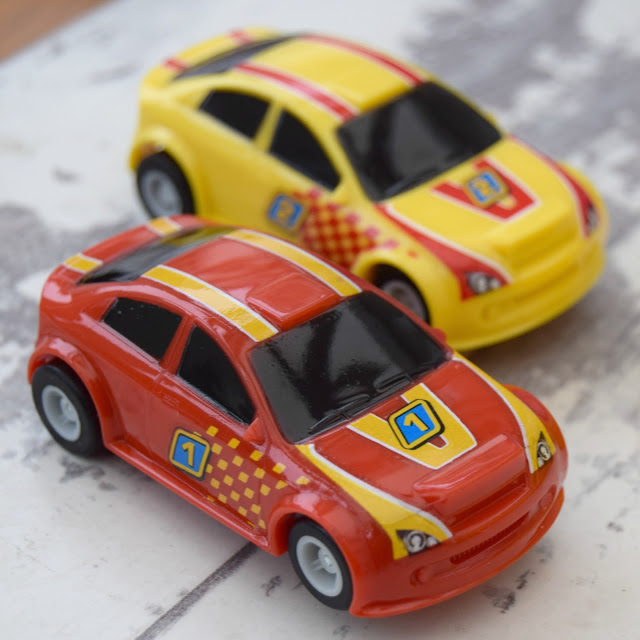 I loved that I didn't need to add batteries. It's so much easier just to plug and play and store away without worrying about leaking batteries, knowing that when you get it out it will have power as soon as it's plugged in. The power seemed far better with plug in power as opposed to battery operated sets too and much faster! 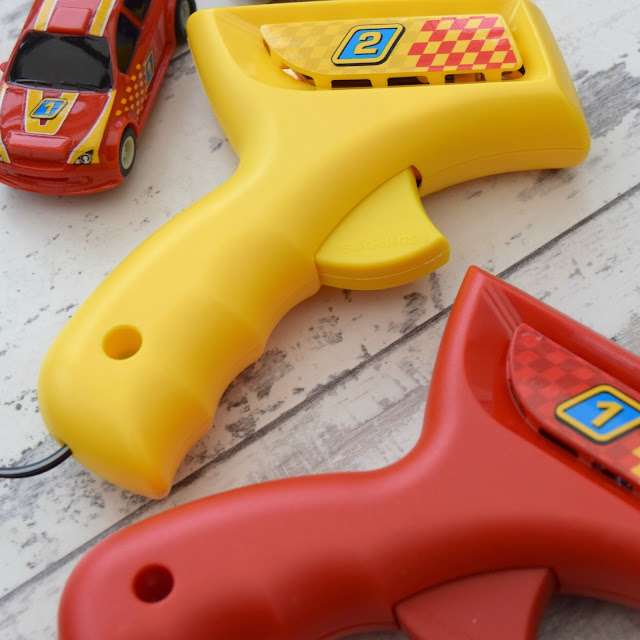 It took me quite a while to get the yellow car to work and once working it kept stopping. I reluctantly had to replace the silver brushes which then made it work perfectly. This wasn't a big job, the box comes with spares, but I would have preferred it to work straight off the mark. I think I must have just had bad luck as I read a lot of reviews on this product and haven't really seen this problem elsewhere.

It was funny watching our cats sat wide eyed watching the cars whizz round and give them the occasional bop, the kids found this hilarious. 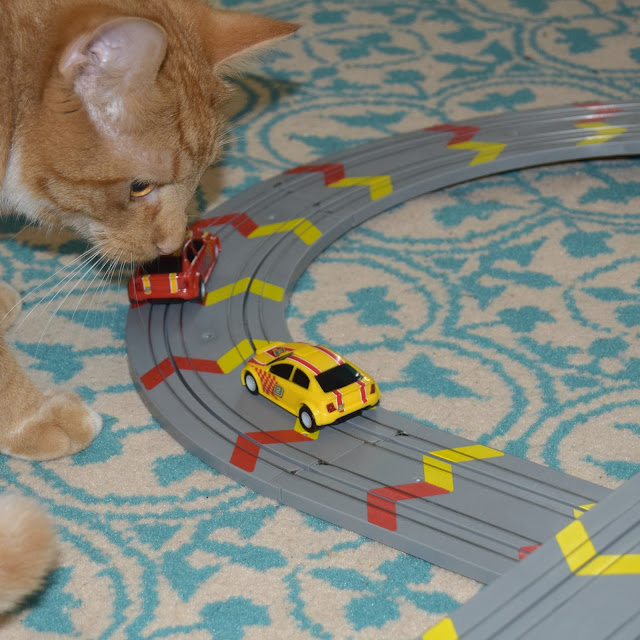 Once set up, this set works so much better than our cheaper version. The controls can be varied in power using the trigger, so I was able to teach Alf to slow down for corners, speed up on straights to stop the car coming off the track quite so often. The cars go nice and fast and it really takes some skill to get the hang of it. 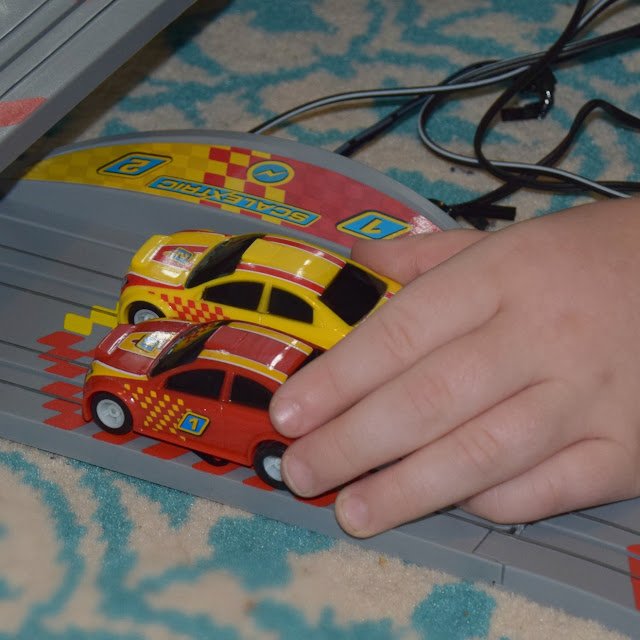 We had great fun racing and it was nice knowing that we had spare parts and no batteries were going to run out at any point. Both cars run at equal speeds (unlike our cheap set), meaning there was no arguing over who played with which colour as it made no difference. Both cars were equally as fun and it came down simply to skill and practise. I can't wait to add to our set, we really enjoyed this set but making it even longer would be even more fun! 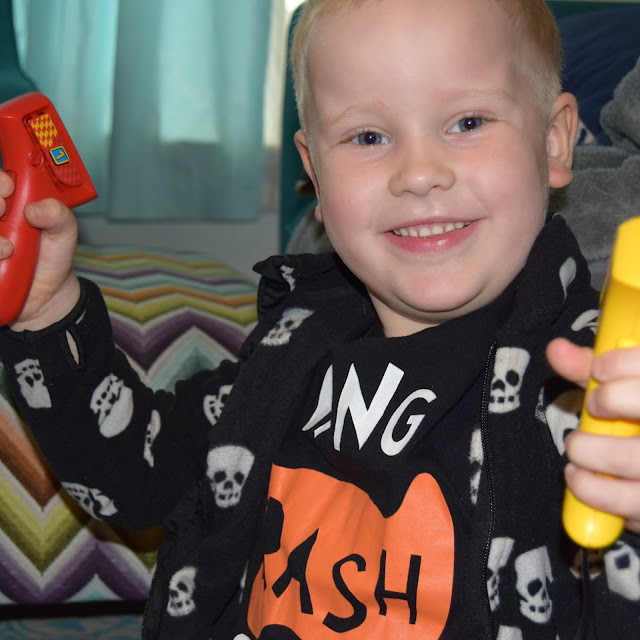 Both kids had a go playing and although Soph did enjoy it, she soon got frustrated with the car flying off as she's not known for her patience. Alf is five and I think the perfect ago for this as he was keen to learn how best to master the controls and had lots of fun, even controlling both cars a lot of the time racing himself which took some real concentration. 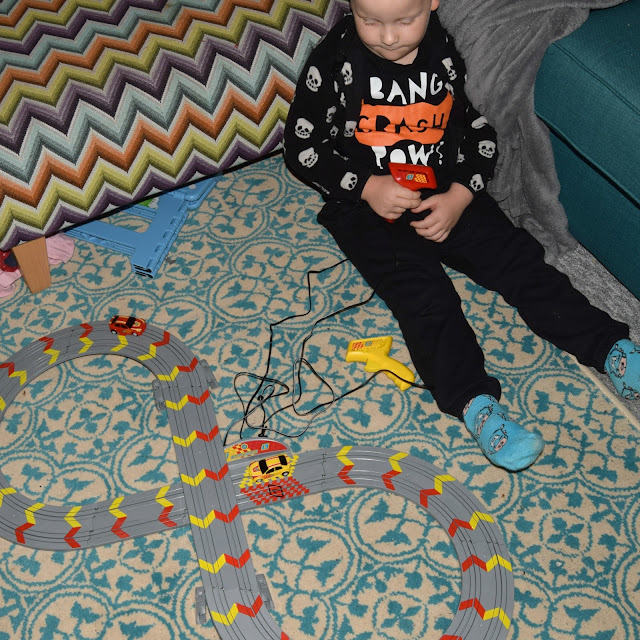 Although I was slightly surprised by the track initially as I expected it to be chunkier and slightly more sturdy, it makes sense being so light and easy to build/store away. The cars are super light but do stay on the track well with some practise. Although this is aimed at ages three and up, I think it's pretty delicate and takes a little more patience and skill than I think the average three year old would be up for.

Overall I would recommend this and think it would be a very well received Christmas gift and bring some nostalgic happiness to parents and grandparents too. My only recommendation though which is purely from my own experience, is that maybe older four /five year olds would be a better starting age for this. If you want to read more or buy your very own set, you can pick one up right now by clicking here.

Did you love Scalextric as a child?