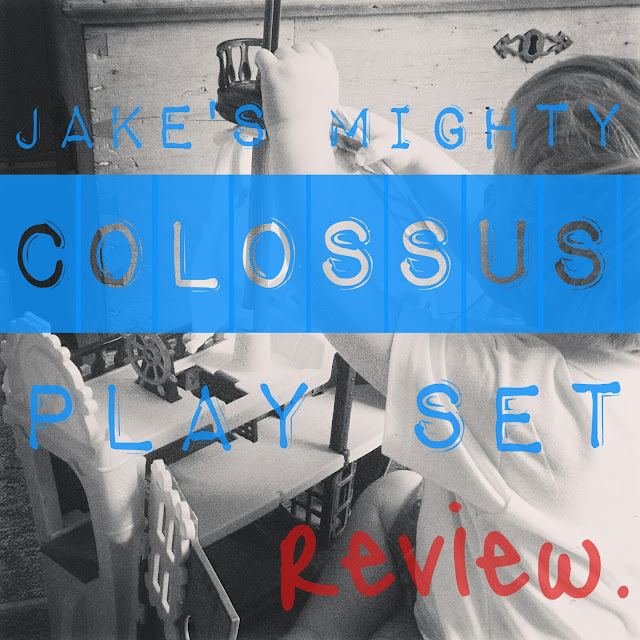 Climb aboard as we review the brilliant 'Jake’s Mighty Colossus High Seas Adventure' play set from Fisher Price. This is a unique multi level toy with so many fun features, perfect for any Jake and The Neverland Pirates fan - or any child that just loves pirates, role play or adventures at sea! Lets face it, all kids love pirates - don't they?! 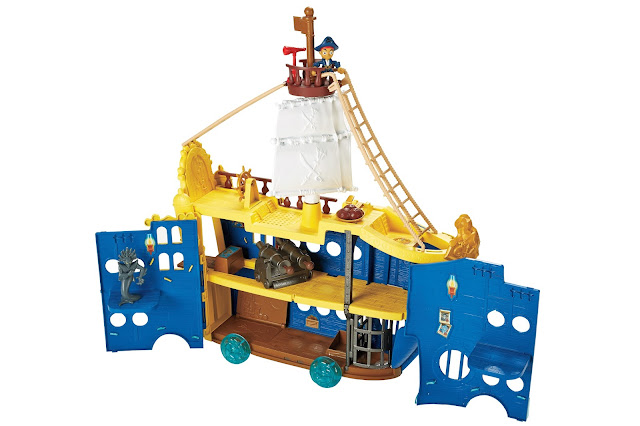 We were recently sent this brilliant toy ship to investigate, play with and review. My two children are S, a very active and curious one year old girl and A, a very heavy handed, fun loving, creative, (nearly) four year old boy. This toy was a huge hit with them both and has not been put down since it arrived. This really would make an amazing gift, it looks so impressive even when just in the box - it would be sure to wow any child on their birthday or Christmas. There is a play value for this toy of 3+ but I would certainly buy for a younger child for supervised play. Please note though, that there are small parts and so this is not officially recommended by the manufacturer! For actual role play, three is the perfect age. When fully built this ship is around two feet tall, but pretty slimline and didn't seem to be one of those 'always in the way toys'. Do you know the ones I mean? 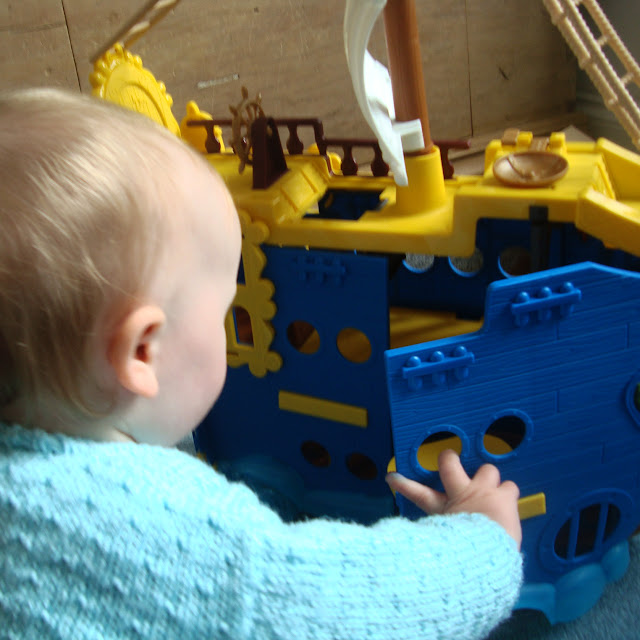 I never expected baby S to be quite so interested in this, but she was fascinated by all the little doors, the included figures as well as opening and closing the big doors and wheeling it around. There are so many features and pieces to investigate on this ship. Generally, I am not a fan of toys with small pieces. I find that we lose bits which renders the toy useless and it then sits, untouched until it's gone. This ship has a few bits to attach on and figures etc to play with, all of which attach well or are stored easily inside the ship when it's not in use. The little bits are great but even just the ship alone would still get lots of attention. We had teddies on board, toy cars and a full on invasion of dinosaur island by some evil sock monkeys! Such a great toy and so easy to get their little imaginations going. 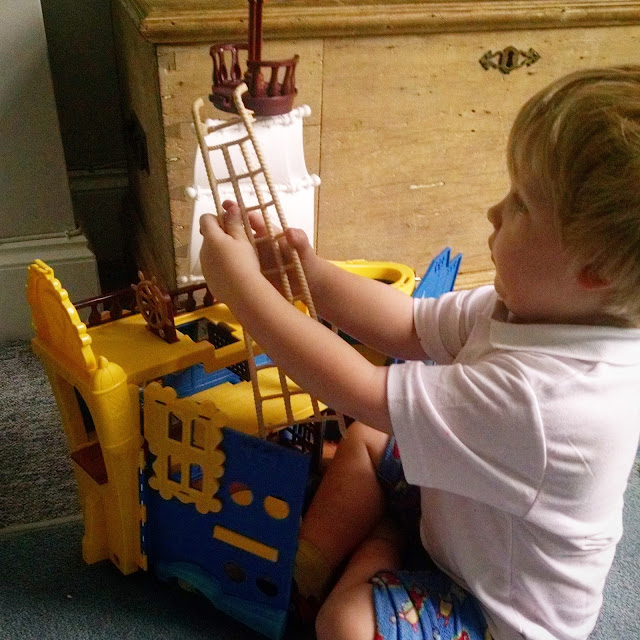 I had better list the key features now so I can explain a little more about how this can be played with. So here we are; 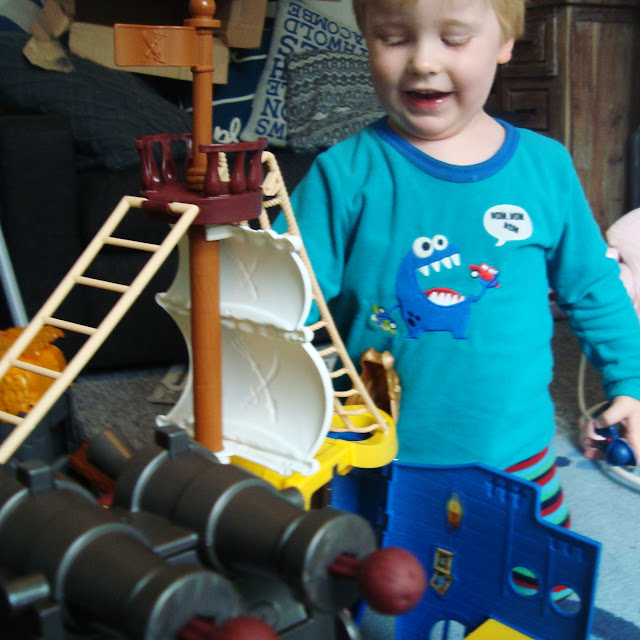 You can take Captain Jake on the high seas in search of Lord Fathom (with the help of his trusty telescope), capture him and put him in jail! Jake can slide down from the crows nest and fire coconuts from his brilliant cannon. These fire really easy and pretty far too! They are rounded so totally harmless and so much fun. These were a real hit with my son, as was the catapult (all sorts of things were getting flung around!). The little steering wheel and ladders are such a nice touch and the set was super easy and quick to put together with just a few simple clicks. It's really nice and simple, as well as being super safe for little hands to play with. 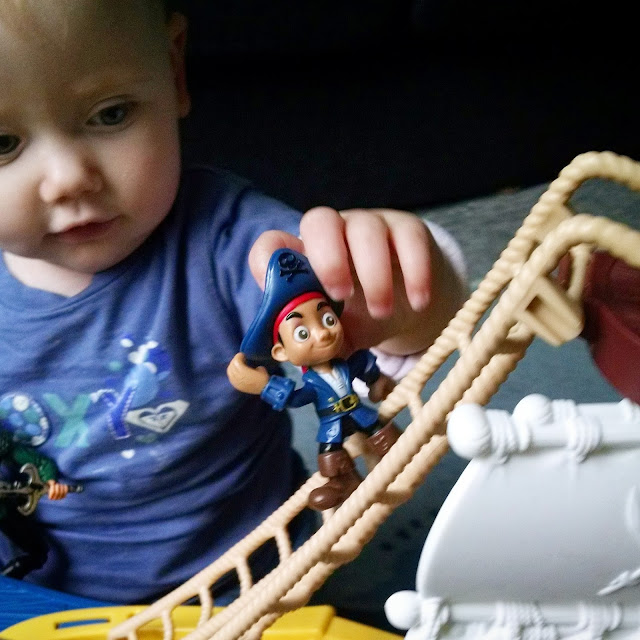 There is a trap door on top which is great fun and also a slide out plank that reveals secret treasure. My son used this slide out part for baddies to 'walk the plank', though this isn't the intended use!

This ship is really good quality as you'd expect from Fisher Price and has been played with solidly for a few weeks now since it's arrival. We have retained all the pieces, mainly due to it clicking together so well and opening up for storage. Also nothing has broken or come close - believe me with my boy (and his iron mitts), these toys really get put to the test, he plays hard! I would definitely recommend and/or buy this as a gift for a child. Suitable for boys and girls of any age, it's great. 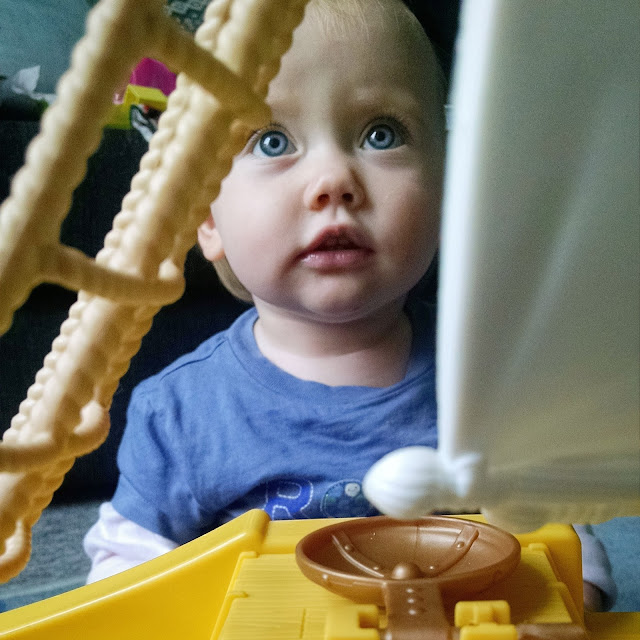 The ship and accessories set RRPs at £39.99 and I can honestly say that it is well worth the money and there will certainly not be any disappointment. I would also like to stress that your child really doesn't need to be a huge Jake fan to get full play and enjoyment from this toy, even I had fun playing with it (a large 31 year old woman child!). It's a toy that would last really well and would suit a very broad age range in my opinion and clearly going by my two children, the toy grows with them from a fun to twiddle, push and open toy for baby, to a major part of battle action for an older toddler!

You can pick this great toy up at Tesco, Amazon, Toys 'R' Us and other great retailers. For more information on this ship, as well as other Disney toys from Fisher Price, you can visit the Fisher-Price website. This one gets a big thumbs up from us. 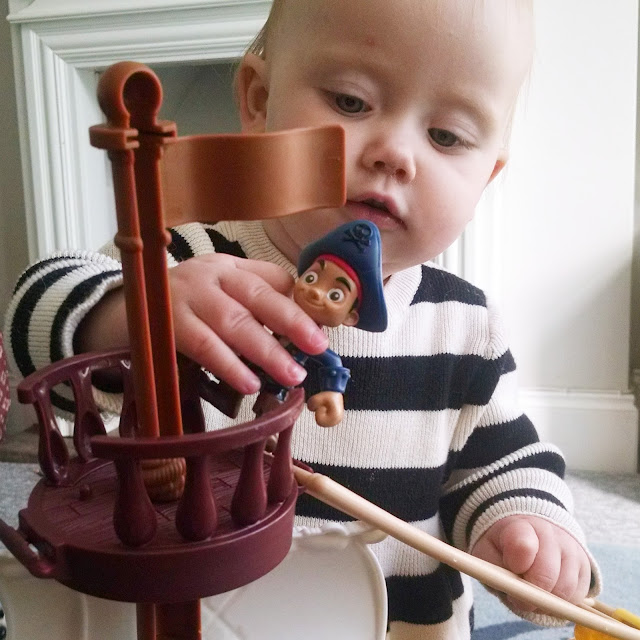 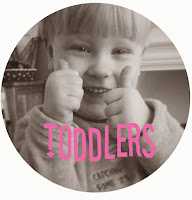 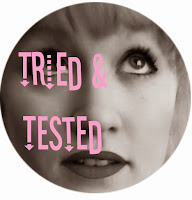 Disclosure: We were sent a sample toy for review purposes. All thoughts and words are my own.